Another post in celebration of Black Women’s History Month.

The carefree Black girl movement has inspired me as a Black woman to love the many parts of myself. Black women are always viewed as one-dimensional characters. They are almost always negative stereotypes. The sapphire, the Jezebel, the mammy, etc. We are expected to be perfect in every way to be viewed positively, like a Michelle Obama or a Beyoncé. This movement of carefree Black women shows that Black women can be whatever the hell we want to be. We will not be boxed into one category. There are many parts to who we are as Black women. For this post, I want to celebrate some Black women who embody “Carefree Black Girl”.

Solange “I can’t be a singular expression of myself
There’s too many parts, too many spaces..”

The “carefree Black girl” image could easily be based off Solange. She has always danced to the beat of her own drum. She is the kind of person you’d want to smoke a blunt and dance to music with. Solange minds her business and her mental health.

Rico Nasty- “Bitch I’m nasty, and I don’t give a fuck like, what is classy?”

She brings an edgy, alternative style to hip hop. Rico makes songs for you to lose your voice screaming to. Her lyrics are feisty, but she’s also a sweetheart to her fans. Watch her go from rocking a rainbow-colored wig to a huge mo hawk the next day.

Cupcakke- “You could call me fat or anything under the sun. Afterwards, Ima still go buy me a honey bun.”

Cupcakke is unapologetically raunchy. She preaches about self-love and LGBT equality. Her music is fun, but there are also messages in many of her songs. She has a big heart and always gives back to her fans.

City Girls rap about being bad bitches and playing men in pretty much every song. They are carefree hood girls from Miami. They’ve never felt the need to pretend to be someone they’re not. People try to project their classism and misogyny onto them and it doesn’t work. They love who they are. 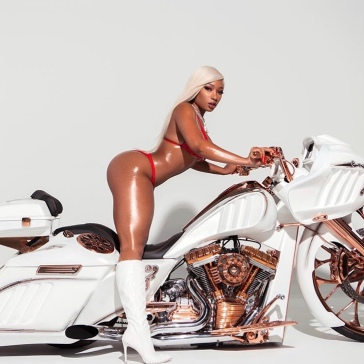 Megan the Stallion- “They still tryna find a thing that I can’t do.”

Her confidence, charisma, and sex appeal is everything. She is unapologetic with her sexuality and does it for the women. Listen to any of her songs and it’ll have you feeling like a bad bitch. She jokes about the hate she receives instead of letting people feel like they’ve gotten the best of her. Even Solange stans.

Janelle Monae- “But even back then with the tears in my eyes
I always knew I was the shit.”

A personal inspiration of mines, this woman has exuded a carefree attitude since she stepped onto the scene years ago. Janelle has stated that she never dressed to appeal to men. She dresses for herself. She is pro-black, LGBT, and a feminist. She has always been supportive of other women, especially Black women. Her music is equally eccentric and inspiring. Her last album, “Dirty Computer,” has many themes such as: Black girl magic and queerness. And the visuals were amazing.